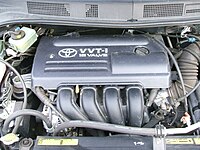 A factory supported bolt-on supercharger kit was sold for the 2003–2004 Corolla and Matrix by Toyota Racing Development, and Pontiac Vibe by GM Performance. The supercharger gives 7.5lbs of boost, with a 40 horsepower and 38ft-lbs of torque increase at the wheels.

Toyota announced a voluntary recall of 2005 to 2008 Toyota Corollas and Matrixes equipped with 1ZZ-FE engines. The issue involves the engine control module, and includes the potential for it to develop a crack on the module’s circuit board, which can result in the car not starting, the transmission shifting harshly, or the engine stalling. Additionally, Pontiac announced a voluntary recall of Pontiac Vibes from years 2005 to 2008 for the same issue.